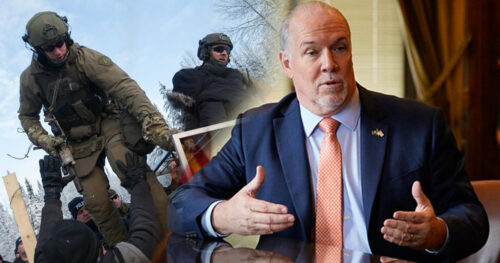 We urge Premier Horgan to meet with the Wet’suwet’en Hereditary Chiefs, rather than rely on a B.C. Supreme Court injunction order to justify infringement of our title and the forcible or violent removal of our peaceful members from our unceded territories.

On Monday, Horgan stated publicly that the “rule of law” applies in B.C., and that the project will proceed despite the longstanding opposition of Wet’suwet’en Hereditary Chiefs. Horgan argued that BC’s legislation to implement the United Nations Declaration on the Rights of Indigenous Peoples is forward-looking and does not apply to Coastal GasLink.

These comments are contrary to his March 16th, 2019 address at a balhats (potlatch) hosted in Witset, where Wet’suwet’en people collectively witnessed Horgan’s commitment to “genuinely work together with hope and optimism for a better future not just for ourselves but for the generation after us and the generation after that.” Horgan stated that the feast marked the start “of a great, great beginning for the Province of British Columbia and the Wet’suwet’en People.” Our teachings expect that leaders show integrity and honour their words.

As plaintiffs in the landmark Delgamuukw-Gisday’wa proceeding, the Supreme Court of Canada held that our title to our lands has never been extinguished. Canadian courts have subsequently confirmed that governments and companies must seek the consent of Indigenous titleholders before proceeding with the development of our lands. The Province has undermined the Hereditary Chief’s authority throughout this entire project by funding and supporting new entities, and consulting those who lack jurisdiction over our territories.

Premier Horgan’s statement that all permits are in place for the project is also misleading. In 2019 Dark House filed an application for judicial review challenging the Province’s decision to allow work on the project to proceed without consultation after artifacts were discovered in the project area. That proceeding is still before the courts.

In addition, BC EAO is currently reviewing CGL’s final report on environmental, economic, social and community effects of the pipeline within Unist’ot’en and Gidimt’en territories. CGL’s report failed to mention the Unist’ot’en Healing Center, a permanent institution inside the study area boundary, valued at $2.5 million dollars and operating with a $400,000 grant from the First Nations Health Authority to expand land-based trauma and addictions treatment programming. By BC EAO guidelines, CGL’s report should be rejected and authorization denied for construction in this highly contested zone.

Premier Horgan’s comments came on the same day the RCMP established a police barricade in Wet’suwet’en territory restricting individuals from entering or leaving the area without authorization, initiating their enforcement of the injunction order.

“The problem we are faced with is that the Horgan government has invested billions of dollars of taxpayer’s money to subsidize the CGL project. This investment is being used to undermine Wet’suwet’en authority and empower CGL to proceed using the full force of the RCMP and judicial system,” asserts Hereditary Chief Dsta’hyl.

“Premier Horgan’s [recent] statements are deeply misleading and disrespectful.” They disregard our authority to grant free prior informed consent for projects on our lands, and “make a mockery of the Province’s commitment to reconciliation and implementing the UN Declaration” says Chief Namoks. “We have been asking the Premier to meet with us since the beginning of this conflict. Premier Horgan has a responsibility and a moral obligation to come to the table. He shouldn’t be hiding behind the RCMP or the company. He should be talking to us directly about how we can work together to protect our lands and maintain public safety.”