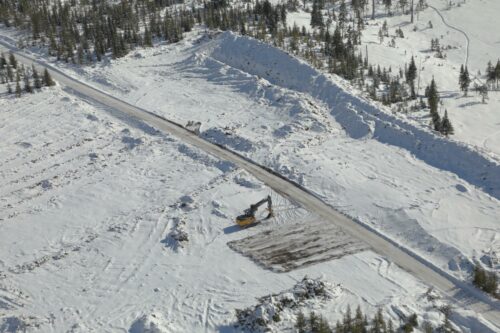 On March 8, 2019, The BC Oil and Gas Commission (BCOGC) released a bulletin responding to the “archaeological complaint” Unist’ot’en made upon finding several ancient stone tool artifacts on Unist’ot’en territory on the site of the proposed Coastal GasLink (CGL) Camp 9A. The BCOGC’s bulletin contains information that is misleading and unsubstantiated.

We agree that the artifacts were not found where our ancestors left them, as they were recovered from a site that had been heavily disturbed by CGL’s bulldozers. BCOGC’s cryptic bulletin, which notes that the artifacts have been displaced from their original location, ignores the role that CGL’s industrial activity has played in disturbing this cultural site and displacing these artifacts. We believe this creates confusion and encourages hurtful and racist speculation that the Unist’ot’en people would lie or falsify evidence of our pre-existence on these lands.

In direct response to the BCOGC’s claims that the artifacts recovered from Unist’ot’en territory were “not from their original location,” Smithsonian Archaeologist Dr. Chelsey Armstrong has said,

“It is an extraordinary claim on part of the BCOGC, and it requires extraordinary evidence. The bulletin is misleading at best, and it’s unclear where the [Archaeology] Branch sits. But the insinuation is certainly controversial and ought to be immediately reviewed by independent archaeologists”.

The BCOGC’s bulletin claims that an archaeological site visit — not an investigation — was undertaken shortly after work was stopped on Camp 9A on Feb. 14. Archaeologists have not yet assessed the Unist’ot’en section of the pipeline, despite assessing other sections and recording multiple archaeological sites on the right of way.

The Bulletin fails to capture how, after artifacts were recovered, Unist’ot’en spokeswoman Freda Huson made repeated attempts to contact the BCOGC and the Archaeology Branch of British Columbia, but she received no reply for almost a month.

“They don’t think the pipeline threatens any sites, because they haven’t looked for any sites. BCOGC archaeological assessments and permitting have been hopelessly flawed from the start. They continue to expedite work on the pipeline while ignoring Wet’suwet’en concerns for the integrity of their lands and cultural inheritance,” said Anne Spice, PhD Candidate.

Dr. Armstrong adds that the area in question has high archaeological potential as it sits near the confluence of three major rivers, countless Wet’suwet’en place names, major trail networks, and that Camp 9A itself bisects a well-known prehistoric trade trail.

The archaeological work carried out to date in relation to the proposed Coastal GasLink Pipeline project demonstrates a clear lack of understanding of Wet’suwet’en oral history, the tools of our ancestors, and our laws and protocols for the treatment of objects and areas of cultural importance. This approach is disrespectful of our Aboriginal title and rights and our deep connection to our ancestral lands. The open letter signed by archaeologists across turtle island and endorsed by the Office of the Wet’suwet’en makes it clear that CGL is currently operating in our territory pursuant to permits which do not protect the cultural heritage of Wet’suwet’en people or recognize the high archaeological potential of this site.

We are certain that the stone tools were made by our ancestors. On our land. They were resting there until they were churned into the open by CGL bulldozers. The tools confirm our longstanding role as inhabitants and caretakers of this territory, a role that is protected and affirmed by our Aboriginal rights and title.

The public release of BCOGC’s bulletin is especially disappointing given the lack of proper communication with Unist’ot’en on this issue. No attempt has been made to include us in the archaeological work conducted on our own territory. Wet’suwet’en cultural artifacts cannot be properly identified and analyzed without the input of Wet’suwet’en people.