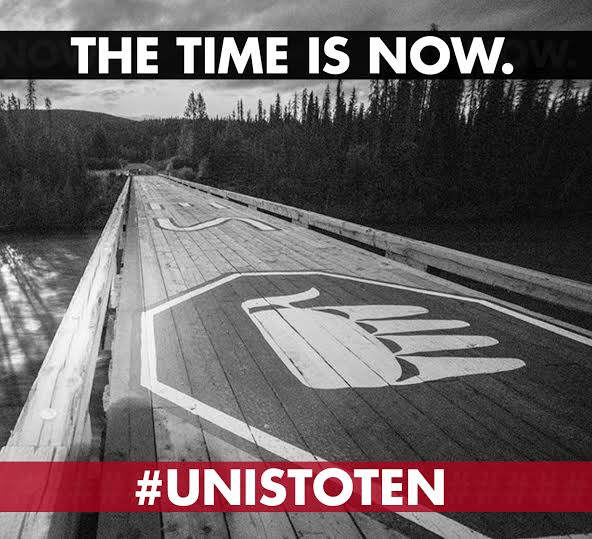 Sixty five organizations and 1527 individuals are pledging support to the Unist’ot’en Camp, demanding that Coastal GasLink, RCMP, and Federal and Provincial governments take no actions in violation of Wet’suwet’en collective Title and the United Nations Declaration on the Rights of Indigenous Peoples.

The pledge was issued in advance of an injunction hearing in Prince George on December 10, International Human Rights Day. Rallies in support of Unist’ot’en Camp will also take place in Prince George, Toronto, and Vancouver.

On November 27, Coastal GasLink Pipeline Ltd. served notice for a civil lawsuit, claiming financial damages for “occupying, obstructing, blocking, physically impeding or delaying access” and applied for an injunction against the Unist’ot’en Camp.

According to Smogelgem, Hereditary Chief of the Laksamshu Clan, “The legal notice personally names me and Freda Huson. This as an attempt to individualize, demobilize and criminalize us in order to bulldoze through our home. Our house groups and hereditary chiefs collectively hold title according to our Anuk Nu’at’en (Wet’suwet’en law). What we are doing to live on and protect our lands, as our ancestors did, is an expression of collective will.”

The Unist’ot’en Camp is a permanent Indigenous re-occupation of Wet’suwet’en land in Northern British Columbia, Canada. The Camp has existed for eight years and is a homestead and healing center. It is along the proposed route of multiple LNG pipelines, including Coastal GasLink. Coastal Gas Link Ltd. is a project of TransCanada Corporation. The proposed pipeline would send fracked gas from Dawson Creek to Kitimat, B.C.

According to Freda Huson, Unist’ot’en Hereditary Spokesperson, “All Wet’suwet’en Clans have rejected the pipeline because our medicines, our food, and our water are all here and not replaceable. These legal challenges ignore the jurisdiction and authority of hereditary chiefs and our feast system of governance, which was recognized in the 1997 Deglamuukw-Gisday’wa Supreme Court case.”

Click here for the link to the pledges of support