Stand in Solidarity with Wet’suwet’en on World Water Day, and Everyday 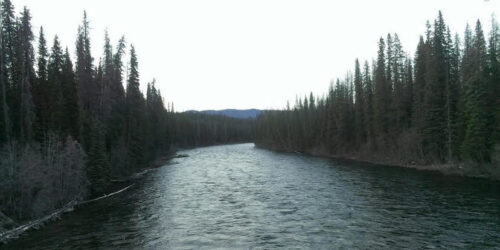 On World Water Day, consider sending some love to the Wedzin Kwa and its protectors. The Unist’ot’en Healing Centre is accepting donations.

I had the honour to spend time at the Unist’ot’en Healing Centre earlier this year.

My visit was right after the suspicious and potentially staged attack on the Coastal GasLink (CGL) Pipeline that created an excuse for more industry and RCMP resources to be deployed against Indigenous land defenders. The Healing Centre is located near the 66-kilometer mark on the Morice Forest Service road.

This area has experienced an escalation in colonial intrusion, as has the Gidimt’en Camp on the same road. Both CGL security and the RCMP, who often seem interchangeable, harass Wet’suwet’en Elders and their supporters.

The RCMP ‘allowed’ me to visit the Unist’ot’en Healing Centre but it was clear they were using intimidation tactics against the women and children there. A few hours after my arrival, the Mounted Police denied passage to a woman with a four-month-old baby. It took several hours of negotiation before she was finally allowed to reenter the Centre.

I noticed the 24/7 presence of CGL security. With their truck’s high beam lights, the guards harassed the Centre’s dogs, who barked throughout the night against this invasive, hostile presence.

Wet’suwet’en hereditary chief and Healing Centre spokesperson Freda Huson – Chief Howilhkat – faces ongoing harassment with incredible strength calm and fortitude. Internationally recognized for her courageous work, Huson and her niece Dr. Karla Tait understand that in order to heal the people, the land must be healed too.

In stark contrast to the uniformed, armed men exerting white supremacy, the Wedzin Kwah streams. It’s river so clean and healthy that people can drink from it without chlorinating or treating it. It flows serenely between snowy banks in perpetual grace.

This vital lifeline, this original infrastructure of Mother Earth, is what the Unist’ot’en (C’ihlts’ehkhyu/Big Frog Clan) and the Gidimt’en chiefs are protecting.

In the face of ongoing colonial violence, Wet’suwet’en grandmothers, aunties, and girls continue to live with dignity and joy on their yintah. Yintah is a Wet’suwet’en expression meaning earth or land, but more specifically territory.

The ancestral lands are inherent to their lives; the people are intrinsically part of the lands. During my time there, I shovelled snow, chopped wood, cooked meals (including a stir fry of moose, gifted by the yintah), and attended a birthday party for an eight-year-old Wet’suwet’en child.

As I went about the mundane tasks of care and daily life, the waste of labour and money for unceasingly patrol and surveillance of peaceful women and children, repeatedly struck me. The colonial state and industry are willing to spend millions of dollars to emphasize their own power, wilfully and arrogantly violating Wet’suwet’en law.

The proper title owners of the yintah issued an eviction notice to CGL. And each day they violate this notice is another day colonial injustice continues and the climate crisis accelerates. They don’t seem to respect Wet’suwet’en law, which is rooted in nature, something colonial law is dangerously disconnected from.

As I have previously written, “allowing a pipeline to destroy the land and water would violate not only Wet’suwet’en law, but the Supreme Court of Canada’s conception of Aboriginal title.”

Colonial law privileges money and property and devalues environmental responsibilities and Indigenous cultures. The message: the climate crisis does not matter, that our children’s futures don’t matter. Wet’suwet’en law, on the other hand, is informed by deep ancestral respect for the long-term health of the land, the rivers, watersheds, and all the lives that rely on the land.

It is heartening to see international solidarity with Wet’suwet’en. Some actors have even united in a message urging the Royal Bank of Canada to to defund Coastal GasLink and stop financing fossil fuels.

As we mark World Water Day this year, I encourage everyone to send some love to the Wedzin Kwah and its protectors. Unist’ot’en Healing Centre will be home to a work camp later this year and donations are welcome. Ongoing legal defense costs for land defenders can be supported here.