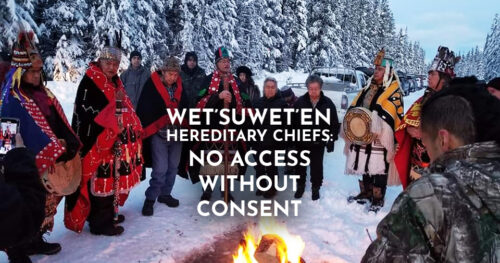 Late in the day January 4th, 2020 the Wet’suwet’en House Chiefs representing all 5 clans oversaw the successful eviction of Coastal Gaslink (CGL) employees from Unist’ot’en and Gidimt’en territories. An eviction letter was provided to security at Site 9A and the eviction was done peacefully. The eviction letter clearly stated that workers were not to return to the territory without the consent of the Wet’suwet’en hereditary chiefs.

Coastal GasLink workers have not been permitted to access the territory to continue work since the eviction. As far as we know, CGL intends to commit trespass on Wet’suwet’en lands and continue construction. They will likely rely on RCMP violence to force their way into our territories once more.

Coastal Gaslink has framed their eviction from our territories as an “Unist’ot’en Action,” but this action was taken collectively, in accordance with ‘Anuk nu’at’en, our laws, and on behalf of all five clans of the Wet’suwet’en nation.

There will be no access to Gidimt’en and Dark House territories without the free, prior, and informed consent of the hereditary chiefs.

Today marks the one year anniversary of a heavily militarized raid on Wet’suwet’en territory at the Gidimt’en checkpoint where Wet’suwet’en people and their guests were forcibly removed by the RCMP tactical teams, including snipers authorized to use lethal force.

The province has proclaimed they will implement the UN Declaration on the Rights of Indigenous Peoples, which includes Free, Prior and Informed Consent, but has failed to intervene in this issue. Currently, the province, federal government, RCMP, and CGL have all violated Wet’suwet’en law.

The UN Committee on the Elimination of Racial Discrimination (CERD) has called upon Canada to immediately halt the construction of the Coastal Gaslink pipeline until Wet’suwet’en people grant our free, prior, and informed consent to the project. The committee urges Canada to withdraw RCMP from our territories and to prohibit the use of force and lethal weapons against our people.

There is no access to Wet’suwet’en territory without our consent. We are the title holders, and the Province must address the issue of our title if they want to gain access to our lands.