4:55am – It’s not yet 5am – still totally dark out – and we’ve just heard RCMP made their first arrest at the #Wetsuweten monitoring post at 39KM. Cops are surrounding people there and beginning to clear the road to the Gidimt’en checkpoint.

5:05am – We’ve heard 13 RCMP vehicles headed up the road earlier this morning. Up to 4 arrests have been made now, and RCMP are taking down tents. Our understanding is these tents were NOT blocking the road and are not part of the injunction area.

5:30am – We’re hearing reports from the front line that some RCMP had their guns out – not pointed at people – but guns in hand.

We’re told that even with more than a dozen vehicles out on the territory, the Houston community hall is still full of cops waiting to invade our lands.

5:43am – We estimate more than a dozen cops on site, with six cops surrounding the person communicating updates over radio.

5:56am – The person on radio at 39km reports RCMP have broken in the windows of their vehicle.

6:22am: We have lost all communication with the Gidimt’en watch post at 39KM after RCMP smashed the window of the radio vehicle. It’s still pitch black out.

6:43am: We have reports that RCMP are now blocking the forest service road at 4KM.

6:59 am: We have reports RCMP have headed up from town in an approximately 20+ vehicle convoy. #Wetsuweten #WetsuwetenStrong

7:22am: 36 vehicles, 1 ambulance and heavy machinery went up from 4 KM. At least 2 bulldozers and excavator.

7:48 am: RCMP are transporting the 4 arrested supporters to Houston. BC. Everyone at 39KM was arrested except media. Media that were at 39km are being driven out in a police van.

10:57 am – RCMP have established a full blown exclusion zone at their checkpoint at 27.5km. They are denying access to media and Wet’suwet’en people, except chiefs who gain clearance from a senior commander. We should never be denied access to our own yintah, but RCMP have turned our territory into a police state.

2pm – We have just learned that heavy machinery has been heard approaching the Gidimt’en checkpoint at 44km. They do not have a visual yet. A RCMP helicopter is now flying over the Gidimt’en camp.

Supporters of the Wet’suwet’en who were arrested today are refusing to sign release conditions.

2:40pm – Gidimt’en Checkpoint now has a visual of heavy equipment moving toward them.

4:44pm: Chiefs & supporters blocked the road at 27km, forcing RCMP to let Wet’suwet’en chiefs in. Clearing work has stopped at 44km. Dsta’hyl (Likht’samisyu) said the #Wetsuweten will enforce the eviction of Coastal Gaslink, with any means at their disposal.

6:45 pm Legal update: All six people who were arrested in Gidimt’en territories this morning are being released with no charges. Three are out already. 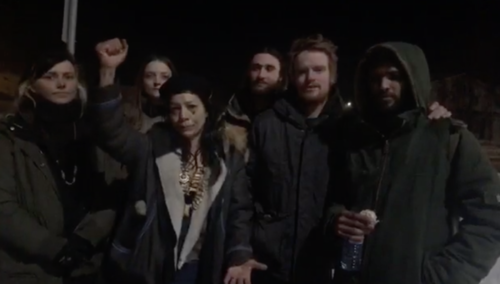