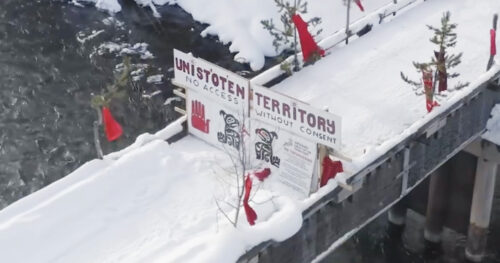 9:50 pm – 2 white RCMP unmarked pickup trucks across the bridge. One cop lurking around with a flashlight. 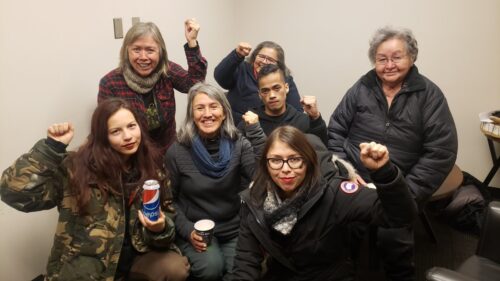 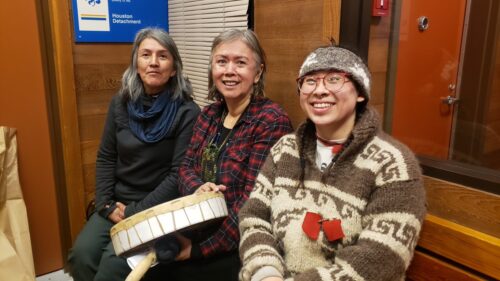 6:11 pm – At least one RCMP vehicle at 44km keeping the area under surveillance.

6:00 pm – Media & Legal Observers spoke to 1 of 2 RCMP officers stationed at gate. They said we can cross the road at night, but not while they’re working. They will return tomorrow. All tactical team off the territory, except for 1 truck.

4:53 pm – The Unist’ot’en Healing Centre and the people inside are safe.

3:51 pm – 6 pickup trucks and graders came across the bridge, leaving now. Cops visible in the beds of canopy trucks. Snowmobiles out.

3:47 pm – Chainsaws heard up the hill from the Unist’ot’en Healing Centre for about 20 minutes.

3:24 pm – Police are obscuring their faces with scarves, balaclava, and sunglasses.

3:22 pm – Legal Observers report the bulldozers were given instructions to plow uphill, create a pullout, and come back down. 3 RCMP conferring with GCL workers outside guard shack, gesturing at back door. 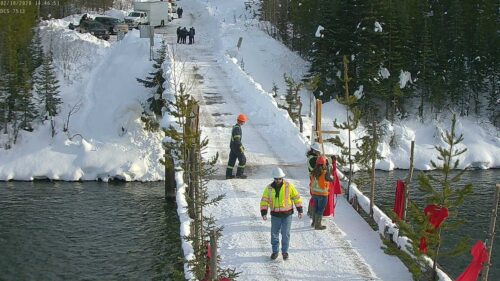 2:40 pm – Contact re-established with on-site media team and LOs. RCMP have corralled and ID’ed all of them. They have secured the guard shack and surrounded it with tape. RCMP will likely cut and/or control wifi at 66km soon.

1:54 pm – RCMP telling media and Legal Observers they will be arrested now if they fail to show ID.

1:51 pm – RCMP asking media and Legal Observers to take things out of bridge building and take them to Healing Centre. Reasoning unclear.

1:44 pm – RCMP officers have breached bridge building, we have temporarily lost comms with inside media. This bridge building was not part of the injunction zone, and is where media were told they could be.

1:36 pm – Dr. Karla Tait, Director of Programming at the Unist’ot’en Healing Centre, is in custody and being taken into a police vehicle.

1:29 pm – Commander who authorized lethal overwatch at Gidimt’en last year is on the scene consulting officers.

1:18 pm – Lady Chainsaw, Brenda Michell, and Freda Huson have been taken into custody in the police van.

12:31 pm – Arrestees not yet in police vehicle. RCMP trying to offer Freda option to accept injunction to avoid arrest.

12:09 pm – RCMP cuffing arrestees with zipties, have told media they will be arrested.

12:01 pm – Unist’ot’en matriarchs and indigenous supporters in custody including Freda Huson are drumming, dancing, and singing. Sacred fire being extinguished by CGL workers.

11:57 am – RCMP Commander approaching folks in custody. Officers are putting out the sacred ceremonial fire. All Legal Observers and media being moved away from arrestees.

11:56 am – RCMP tactical team staged on other side of the river with nets.

11:54 am – Arrested matriarchs only have one journalist and two Legal Observers with them. RCMP have blocked all other media from their vicinity.

11:34 am – Spirit fire outside Healing Centre still burning. Occupants can’t leave the building, unsure how long it will last.

11:17 am – RCMP officers have begun removing red dresses. They are telling us the guard house now falls within the injunction. Unist’ot’en matriarchs in custody calling on ancestors to stand with them.

11:03 am – Officer McKay attempting to read Freda her rights. She is singing over him.

11:01 am – RCMP dismantling gate on the bridge. 6 arrests, including Freda Huson. 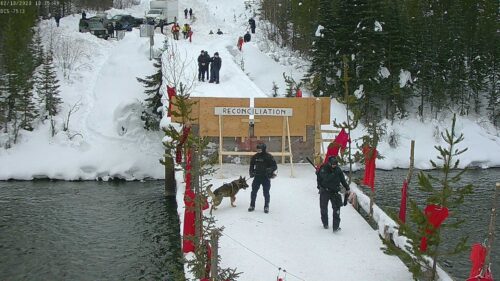 10:31 am – RCMP bringing in K9 units towards matriarchs in ceremony

10:24 – RCMP pointing at young indigenous woman with walkie talkie at the bridge. Appear to be targeting.

10:15 am – RCMP overheard, going to send another tactical team shortly.

10:13 am – Ceremony continues. RCMP continue to carry supplies into the bush on other side of river.

9:51 – RCMP Officer appears to have tripped over one of the red dresses.

9:48 am – reports that Transport Canada is not aware of any airspace restriction.

9:38 am – 11 tactical at end of driveway of Healing Centre, 7 on hill. 2 canine units. DLTs hovering around ceremonial bell structure filming.

9:25 am – Police on other side of river has several unknown objects. One is flat and green. 2 snowmobiles down the hill, DLT in front and 10 other tactical. Cops approaching matriarchs.

9:24 am – Approximately 10 RCMP walking down from top of hill on Unist’ot’en side of territory. Cops reading injunction again.

9:22 am – RCMP now descending hill. Multiple cops on other side of river, downstream, across from the cabin.

9:13 am – RCMP approaching water in snowshoes, assessing bridge, using binoculars. Another helicopter dropped down and went back up.

9:11 am – More RCMP officers crouching behind snowbank, hiding from view. 2 high visibility and one in red plaid. 2 helicopter dropoffs at the top of the hill so far.

9:09 am – Ravens flying above the officers. They are Oyate, Karla Tait’s daughter, in spirit form. She told us they would be with us. She is 5 years old Unist’ot’en.

9:08 am – Black helicopter landed on top of hill behind Unist’ot’en Healing Centre, then took off again.

9:05 am – RCMP filming, also one woman and one man who may be press filming with RCMP. One officer with yellow stripe on hat.

9:04 am – Helicopter hovering above the Healing Centre.

9:03 am – Unist’ot’en matriarchs are singing the Womens Warrior Song.

9:02 am – 2 RCMP officers heading into bush on downstream side of bridge wearing snowshoes and carrying a spineboard.

8:59 am – RCMP setting up large device on top of truck, appears to be some kind of telescope object on a tripod with plastic wrapping and a viewfinder.

8:52 am: RCMP are climbing the snow towards gate entrance, telling all present they will be arrested and face civil or criminal contempt. Matriarchs are calling the ancestors. There are only women here besides one male media and one male indigenous supporter. 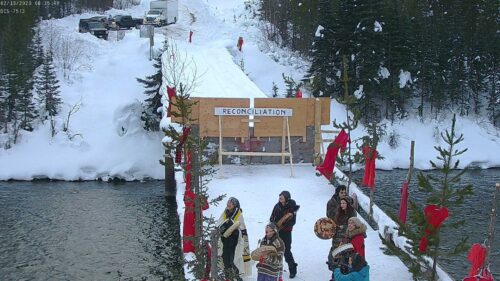 8:49 am – Helicopter coming in. Civil injunction from CGL/TC Energy being read. RCMP getting into snowshoes.

8:47 am – RCMP tactical team approaching gate. 1 in army fatigues carrying equipment. One in back, in woods. Chopper overhead. 2 snowmobiles behind. Repeating no drones message on loudspeaker.

8:44 am – RCMP tactical team amassing at end of bridge. Including Rob Picola (who approved lethal overwatch). Industry accompanying them to the gates. 7 officers, 2 in yellow vests behind them.

8:40 am – RCMP on megaphone at #Unistoten bridge: “This is the RCMP. This airspace is now restricted. Do not operate any drone in this area. This restriction is approved by transport Canada.” Freda Huson: “This is not Canada! You are invaders! LEAVE!”

8:35 am – RCMP approaching bridge at 66km. 3 SUVs, one large van, line of trucks behind. Matriarchs are drumming and singing on the bridge, walking through the red dresses of their stolen sisters.

8:22 am: Unist’ot’en matriarchs drumming on bridge, and making offering to the ancestors in the river Wedzin Kwa, as RCMP convoy advances. 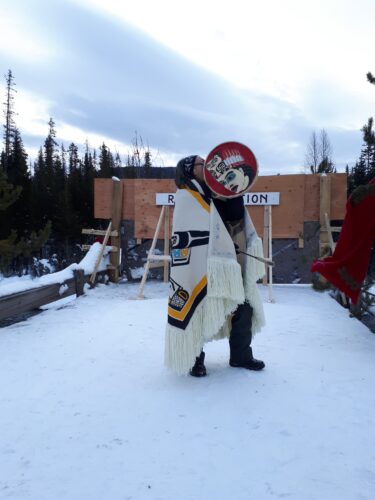 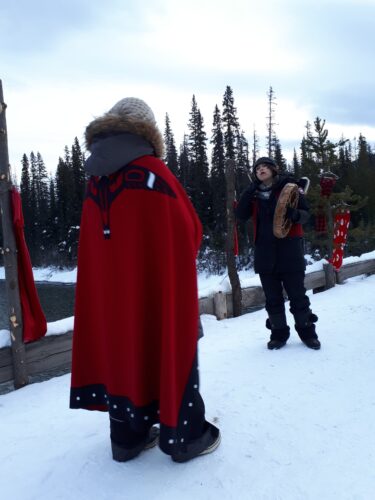 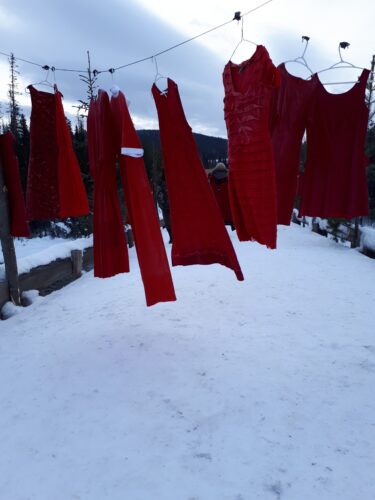 6:50 am – Convoy of RCMP tactical vehicles just left the community hall in town and are headed down Hwy 16.