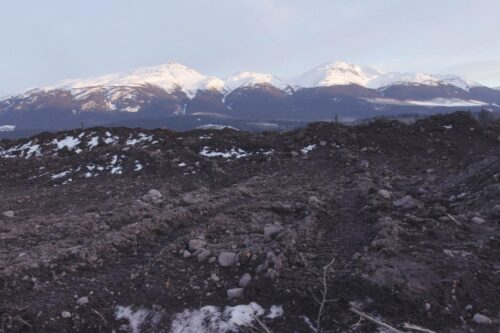 Disturbed earth at “Camp 9A” site.

May 8, 2019 – The Unist’ot’en House group, a.k.a. Dark House, has filed an application for judicial review in the BC Supreme Court in relation to the proposed Coastal GasLink pipeline project. The judicial review challenges the decision of the BC Oil and Gas Commission (BCOGC) and provincial Archaeology Branch to accept an archaeological mitigation plan prepared by Coastal GasLink without undertaking any consultation with Dark House.

On February 13, 2019, several lithic stone tools were found on Dark House territory within the portion of the proposed project known as Camp 9A. In total, six artifacts were recovered including two biface projectile points, three projectile point fragments, and a core fragment. 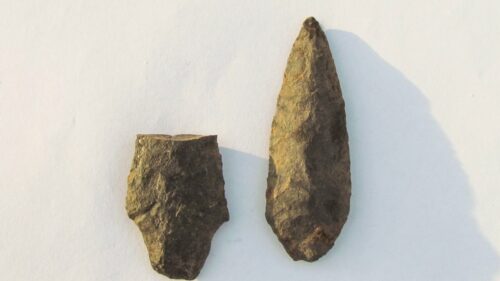 Camp 9A is indisputably within our territory and subject to our Aboriginal title and rights. Collectively, these artifacts are important evidence confirming the longstanding use and occupation of Wet’suwet’en people in the area. As such, Coastal GasLink continues to disturb a significant archaeological site that informs Wet’suwet’en history, occupancy, and potential evidence for rights and title.

Since the artifacts were first discovered Dark House have repeatedly asked both the Archaeology Branch and the BCOGC to consult about the protection and preservation of the disturbed archaeological site, and the high potential for other sites to be impacted by CGL given that no impact assessment was conducted in the territory. Despite this, the Commission and Archaeology Branch accepted Coastal GasLink’s mitigation plan for our archaeological sites and authorized work in Camp 9A to resume without consulting Dark House. To date, no attempt has been made to include Unist’ot’en people in the archaeological work conducted on our own territory.

Dark House’s archaeologist has identified a number of significant deficiencies with the plan, and has consulted with House hereditary leaders concerned about the loss and destruction of their cultural inheritance. Due to the decision of the Archaeology Branch and the BCOGC to approve Coastal GasLink’s mitigation plan without consultation, there is a serious risk that Wet’suwet’en culture and heritage will be damaged or destroyed.

Dark House made the decision to file the judicial review in order to protect its territory and cultural heritage in accordance with Wet’suwet’en law, and to ensure that the Crown’s constitutional obligations are fulfilled.

“We expect, as we always have, that our Aboriginal rights and laws are respected. It is unacceptable for the Crown to continue to act through its agents in ways that completely dismiss and ignore the duty to consult with us on matters related to our unceded traditional territories. The Province’s willful refusal to honour us on a Nation to Nation level condones the destruction of vestiges our ancestors left that maintain their presence on our Yintah. It marks another example of continued oppression and violence against the First Peoples of this land. We aim to hold Canada accountable through its legal system, and with this judicial review we are giving Canadian courts an opportunity to uphold justice, and honour its own laws,”