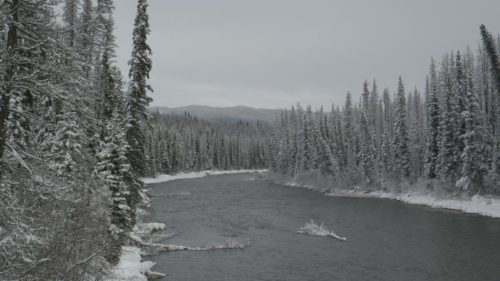 Smithers (BC) – Wet’suwet’en Hereditary Chiefs representing all five clans of the Wet’suwet’en Nation reject the BC Supreme Court decision to extend Coastal GasLink’s injunction order, which has criminalized the practice of Anuk ‘nu’at’en (Wet’suwet’en law) and inflicted violence against Wet’suwet’en people on our own unceded lands.

Coastal GasLink (CGL) has never obtained consent from the Wet’suwet’en Hereditary Chiefs to enter or work on our territories. Since obtaining the initial interim injunction order, CGL has bulldozed through our territories and destroyed our archaeological sites, while private security firms and RCMP have interfered with the constitutionally protected rights of Wet’suwet’en people to access our lands for hunting, trapping, and ceremony. CGL has violated the conditions of their permits with impunity, facing no consequence from Canadian regulatory authorities.

The interim injunction, which was granted by Justice Church in December of 2018, six months before the Wet’suwet’en were able to present any legal defense, has already done irreparable harm to our territories, people, and the practice of our laws. The decision ignored the legal efforts of our ancestors, who spent more than a decade in court with the Delgamuukw-Gisday’wa v. Queen case to have the Supreme Court of Canada recognize that Aboriginal title had never been extinguished across 22,000 km2 of Wet’suwet’en yin’tah (traditional territory).

At a time when the Province of British Columbia is celebrated for adopting the UN Declaration on the Rights of Indigenous Peoples (UNDRIP), the Wet’suwet’en people are actively denied the protections of UNDRIP on our own lands. When we enforced our own laws and required that industry seek Free, Prior, and Informed Consent for development on our lands, we faced a brutal display of militaristic police violence and an ongoing police occupation of our territories. We have learned, through the reporting of The Guardian, that RCMP are prepared to kill unarmed Wet’suwet’en people if we continue to uphold our laws.

We urge the Province, in the strongest terms, to meaningfully uphold its commitment to implement UNDRIP, and to withdraw the RCMP from our territories where they oppress our people and criminalize our authority to the benefit of industry. Enforcement of this injunction by the RCMP will lead to the forcible removal of Wet’suwet’en people from our own lands and the bulldozing of our homes, continuing the violent displacement that our ancestors experienced.

We are disappointed that the Supreme Court has rendered a decision that contradicts Wet’suwet’en law, but we reaffirm that Anuk nu’at’en remains the highest law on Wet’suwet’en land. Coastal Gaslink continues to operate as though Wet’suwet’en law does not exist, and to trespass on our unceded lands.

We have a responsibility to enforce Wet’suwet’en laws and to ensure the health of our territories for future generations, as we have done for thousands of years. We have always held the responsibility and authority to protect our unceded territories and we will continue to do so.

“In this time of reconciliation, with BC being the first province to legislate UNDRIP, this ruling by a court in BC against Indigenous rights and recognition truly proves that industry, not the people, can control the Province and its laws. Ultimately, we are our own government, and we decide who comes on our territory. We are the hereditary chiefs. British Columbia and Canada only have assumed and presumed authority on our lands.”