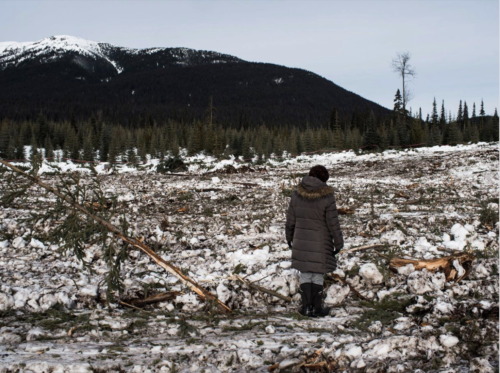 January 27, 2019 – The Unist’ot’en House Group of the Gilseyhu Clan is demanding that Coastal GasLink Ltd. cease work immediately due to non-compliance with BCOGC and BCEAO permits and ongoing violations of Canadian and Wet’suwet’en Law.

RCMP and the Conservation Officers’ Service have refused to intervene in the destruction of active Wet’suwet’en traplines by Coastal GasLink bulldozers in blatant violation of Section 46 of the Wildlife Act. Unist’ot’en was told by the Conservation Officers’ Service this weekend that investigating this ongoing crime is not a priority for their office. CGL contractors have now completely bulldozed the section of trapline at Camp 9A, with many traps unaccounted for.

Under the conditions of Environmental Assessment Office (EAO) and BC Oil and Gas Commission (BCOGC) permits, Coastal Gaslink (CGL) is required to have completed a site-specific archaeological survey before undertaking any clearing work on the proposed man-camp site in Unist’ot’en Territory known as Camp 9A. CGL acknowledged in their injunction application that these archaeological surveys have not been completed. The Office of Wet’suwet’en and Unist’ot’en House Group have not received evidence of these completed site-specific surveys, as is required by the EAO and BCOGC. Due to the Unist’ot’en House Group’s prolific use of their territory since time immemorial, it is critical that proposed work sites are properly assessed to prevent destruction of historical encampments and artifacts or gravesites.

The provincial Environmental Assessment Office, FLNRO, the BC Archaeological Branch and the BC Oil and Gas Commission have not taken substantive action in response to Unist’ot’en and Office of Wet’suwet’en requests for an immediate stop-work order to address and investigate potential ongoing violations of the conditions of their Environmental Assessment Certificate and their BCOGC permits.

The Coastal Gaslink Environmental Assessment Certificate also requires CGL to notify all tenure holders in the area affected by pipeline construction a full six months before undertaking any construction activity that could impact their tenure. Chief Knedebeas holds trapline tenure for Unist’ot’en territory, and was notified by CGL that site clearing and construction on Camp 9A would not begin until 2020.

Earlier this month, under the threat of police violence, Unist’ot’en Chiefs reached an agreement with the RCMP to comply with CGL’s temporary injunction. That agreement states that “there will not be any RCMP interference with our members regarding access to the territory for the purposes of trapping and/or other traditional practices.” In violation of this agreement, RCMP have threatened Wet’suwet’en trappers with arrest for attempting to access their traplines, and warned healing centre patients that they could be arrested for participating in ceremony. RCMP escorted CGL into active work zones, while refusing to allow or facilitate access of Unist’ot’en members to attend the ceremony and check on the safety of participants who were beyond the active workzone. CGL workers have been citing breach of the injunction and demanding healing centre clients remove small branches and minor debris from the road way while they were collecting firewood, without causing any obstruction to CGL work. Clients have identified feeling unsafe as a result of continual RCMP presence outside the healing centre and the unwarranted, confrontational conduct of CGL work crews.

We are witnessing police break all of the agreements they have made with our chiefs, watching them actively protecting CGL and its contractors as they violate the Wildlife Act and the conditions of their permits, and watching the agencies responsible for enforcing these conditions do nothing. We opened our gates assuming that everyone would be treated equally under the law. We see that the RCMP, the EAO, the BCOGC, and the NDP-Green coalition government have no intentions of enforcing any part of the Canadian law that causes any inconvenience to this rich, powerful corporation.

Coastal Gaslink is breaking all their own Canadian laws while we are upholding Wet’suwet’en laws and responsibilities to the land.”

See attached supporting documents, including permit conditions and photos of Camp 9A site and destroyed trapline. Traplines are culturally significant markers of continued use, and are a source of furs and sustenance. The location of this photograph documents the destruction of the trapline by Coastal GasLink LTD on Unist’ot’en Territory. The Unist’ot’en House Group of the Gilseyhu Clan holds title to a large area in Northwestern British Columbia. The company, Coastal GasLink is attempting to build a fracked gas pipeline without the Hereditary Chiefs’ consent.